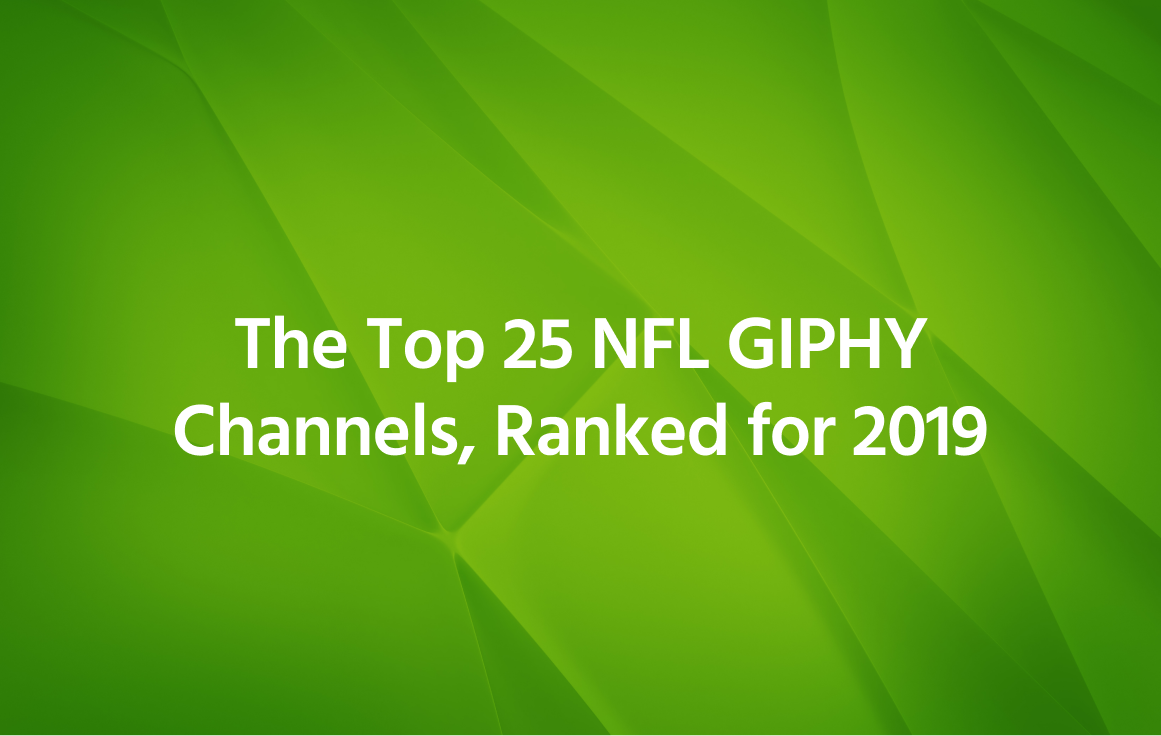 The 2019-2020 football season is underway so we decided to celebrate by ranking the top 25 NFL team GIPHY channels. While the NFL has one of the most popular and best-performing channels on GIPHY with over 22 billion views, we wanted to take the time to look at the content and performance of each individual team channel to understand which organization is creating the best content and getting the most fan engagement.

While there will be one team crowned champion, it’s worth noting that every team on this list is a winner. These teams have all used the power of GIFs to give fans the tools to express themselves with branded content from their favorite teams in messaging apps and on social media. When you’re able to generate hundreds of millions of positive impressions by entertaining fans, everyone wins.

The Cowboys GIPHY channel only has a handful of GIFs, but they’ve been able to generate a few million views from what looks like existing video content from player interviews cut into fun reaction GIFs. Naturally, the star GIF of this channel is a surprised Dak Prescott reaction GIF.

The Redskins have some fun GIFs on their channel. Most being outtakes and reaction GIFs from gameplay footage. This “Horseback Riding” GIF of Will Compton has generated most of the Redskins total views bringing in over 7 million views alone.

The Bucs are close to breaking into the 10 million view club. The Buccaneers channel can thank their Stickers for their success. The GIF Stickers on their channel are bringing in more than half of their total view count, including this screaming Gerald McCoy leading the team with over 2 million views.

The Seahawks channel mixes gameplay, goofy behind the scenes player footage, and text-based GIFs to help the 12th man get pumped for game day. Blitz (the mascot) gives Seahawks faithful a fun way to greet each other with this “Hello/Wave” GIF.

Jerome Baker lays down some serious dance moves to bring in almost 10 million views for the Dolphins. The Dolphins also paid attention to detail and celebrated the heritage of their brand by making a GIF to show how their logo changed throughout the years for their channel profile picture.

Baker Mayfield smirking during a press conference says it all about the Browns this season with a new star-studded roster. This will probably be his reaction when he finds out this GIF has over 11 million views.

The Jaguars have 20 GIFs, but this is the GIF that matters most bringing in over 18 million views alone. Can anyone confirm if this is how Prince Amukamara arrives on game day?

Okay, so the Saints have a lot of GIFs. The sheer volume of their GIFs has brought them close to the 20 million view mark. Some of the best GIFs on the channel show Saints players throwing (and kicking) inflatable emoji balls at the camera.

The Broncos are boasting over 30 million views heading into the 2019 season. They have some great reaction GIFs of star Broncos players. The Broncos social team gets bonus points for flexing their knowledge of meme culture by creating this “Excuse me” GIF with cornerback Chris Harris Jr. that pays homage to the legendary Excuse Me reaction GIF.

The Chargers understand the value of reaction GIFs that use big bold block text to get the message across. When paired with a star running back like Melvin Ingram, you’ve got a game-winning GIF for over 8 million views.

Even though Taiwan Jones is no longer wearing black and silver he still holds the record for most views on a GIF on the Raiders GIPHY channel (9 million) as he tells the competition to Simmer Down.

The 49ers have earned the coveted Most GIFs Award. They have over 1,400 including a healthy blend of traditional GIFs and Stickers. The 49ers have been aggressively working on their GIF presence for the last few seasons and it’s paid off with nearly 40 million views.

The Jets have gotten serious with their GIF marketing for 2019. They’ve come with brand new hi-def GIFs. This Jamal Adams GIF has generated over 11 million views in just 30 days. If this trend continues, it’s likely the Jets GIPHY channel could be a top contender next season.

The New York Giants are in elite company with a top 10 GIPHY channel. They use a wonderful mix of player reactions, in-game footage, emojis, and epic battles of Rock-Paper-Scissors. It looks like Evan Engram swept Saquon in the series with a Paper/Scissors combo. Well done.

DaBears have one of the most populated GIPHY channels with over 500 GIFs including a healthy mix of in-game footage, Stickers, and reaction GIFs. Best of all, the Bears make sure to show off a celebrity co-sign from superfan Bill Murray.

The reigning Super Bowl champions know how to engage their New England fanbase with GIFs. This GIF of Tom Brady showing off his jewelry has close to 19 million views, this isn’t surprising as it’s probably used frequently by Patriots fans to end debates about who’s the greatest QB of all time.

If there’s one thing we've learned about Kansas City Chiefs fans, it’s that they love a good GIF Sticker. Mark Fields “Can’t Hear You” GIF has brought in an astounding 26 million views in the last 30 days alone.

Welcome to the 100 million view club. The Colts know how to have fun with their GIF strategy. Someone in the Colts marketing department saw a video of a young Colts fan being held up in the air like Simba and got right to work to make this wonderful GIF. Well done.

While most teams have done film shoots to create reaction GIFs of their star players, the Texans took it up a notch. They’ve given fans a full set of reaction GIFs and Stickers of their mascot Toro and it’s paid off earning them a Top 5 NFL GIPHY channel and more than 100 million views.

The Panthers have a well-organized GIF presence with GIFs for every occasion. Different mood and reaction GIFs of players, custom Stickers for some of their star players, in-game footage and sideline antics. Most importantly they have a happy Cam Newton wearing his custom bucket hat-visor hybrid that earned more than 12 million views in the past month.

The Lions come in at the #3 spot thanks to a deep GIF library of GIFs and GIF Stickers of their star players that they have built over the last 3 years. But will their success with GIFs translate on the field this season? We’ll have to wait and see.

We like to imagine that Money Matt Bryant is celebrating with all the extra ad dollars the Falcons saved because of the super low CPM on their GIFs. That's 186M impressions with no ad spend. Well done Falcons.

The competition isn’t even close. The Ravens claim the #1 spot of our first-ever NFL GIPHY rankings. Ravens fans have a healthy supply of reaction GIFs for any need. Whether they are celebrating with friends or talking trash, they can say it with a GIF. Regardless of what happens this season, the Ravens are winning with GIFs.