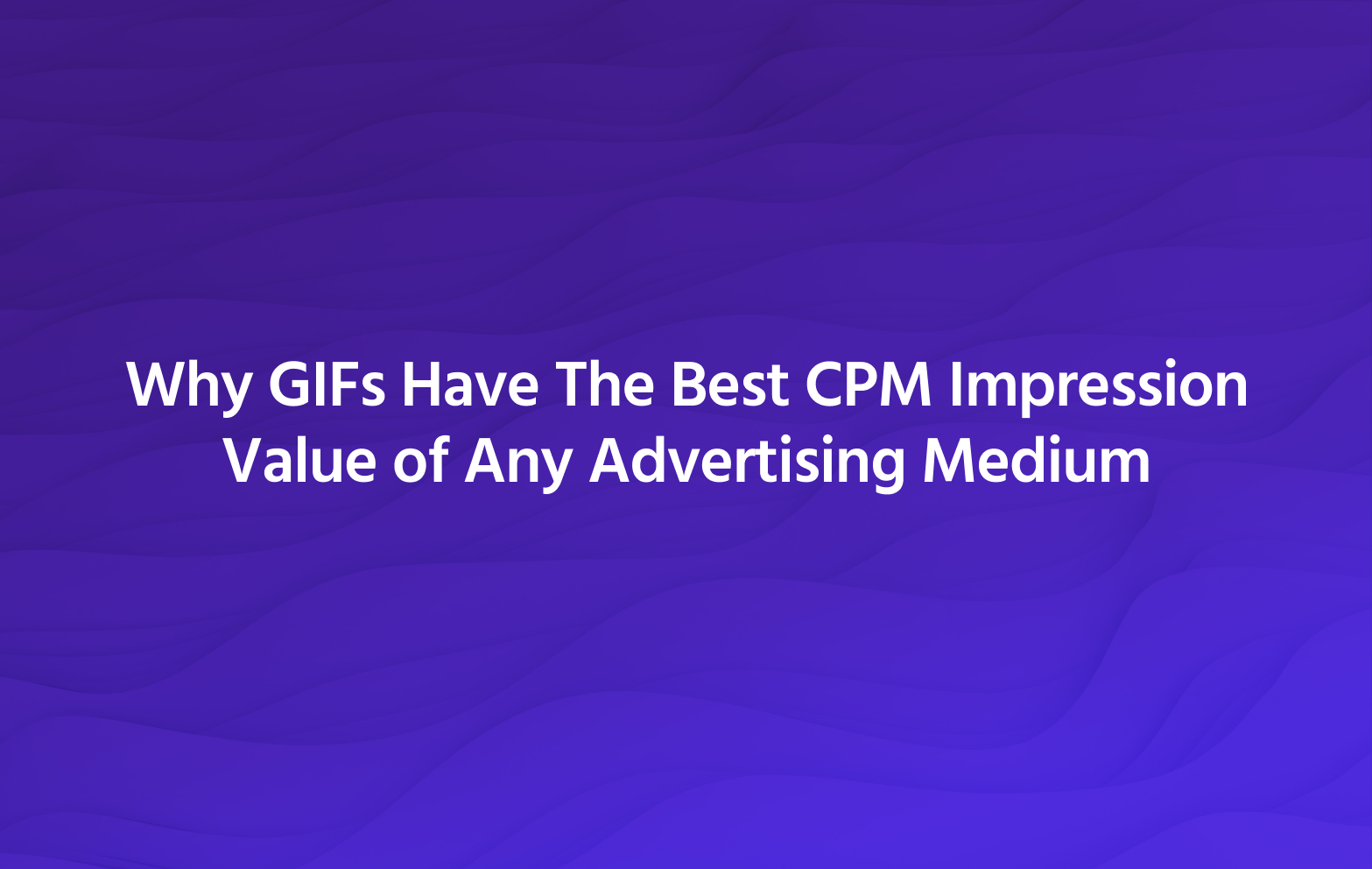 GIFs have the best CPM of any marketing channel

I know, it’s a bold statement. How can GIFs have a better CPM than search, digital, social, TV, or out-of-home? This article will walk you through why GIFs have the best CPM of any marketing channel. If you aren’t familiar with why GIFs are valuable as a marketing channel, you can read about the value of GIFs in marketing.

The core driver of GIFs extremely low-cost CPM is the distribution model. Once a GIF has been made publicly available through major GIF search engines like Giphy, Tenor, and Gfycat it can be shared by people in their messaging conversations and on popular social media apps indefinitely. There’s no need to continue to pay to deliver advertisements like TV or billboards, and you won’t need a dedicated social media manager to post on your social channel multiple times a day. You can create and upload GIFs and reap the benefits of evergreen content that consumers engage with (and love) at an extremely low CPM.

The Cost of GIFs

The cost to create a GIF that can generate hundreds of thousands, even hundreds of millions of impressions is surprisingly low. The cost to create GIFs can be free to many because they can be created from existing video content. Brands can leverage their existing advertising campaigns and repurpose that same video content into GIF format, upload it to a major GIF platform, apply relevant keywords to the GIF and begin racking up thousands of brand impressions immediately. With the only cost being the few hours it took to create and upload the GIF.

The example above is the easiest and cheapest way to get started. There are additional costs that can be built into creating better GIFs. For example hiring a GIF artist or animation specialist to create a custom GIF has creation costs associated with it ranging anywhere from $100 to $1,000 per GIF. You could also invest additional resources in performing keyword research to identify what keyword to attribute to your GIFs and what keywords provide an opportunity for your GIF to maximize visibility and usage. However, these costs that are built into creation and implementation of GIFs are nominal compared to other marketing channels. Since GIF distribution and sharing is done by consumers themselves, you won’t have to spend your budget on distribution or media buying.

However, you can spend on media buying if you like. If you have a large enough budget allocated you can buy promoted placement for your GIFs on major GIF platforms to put your content directly to the top of search results. These promoted campaigns tend to be costly, and could cost more than six-figures for a few days of placement depending on the GIF, keyword, and platform you choose. However, with other 7 billion GIFs sent everyday, you’ll be getting your money’s worth in brand impressions and consumer engagement.

GIFs are great because they are evergreen content. Investing in creating great GIFs for your brand creates evergreen content that consumers continue to use and see, much like a piece of content that ranks highly in search results on Google. Like a webpage that ranks high in search results continues to generate relevant traffic over time, a branded GIF that ranks for keywords related to your brand will continue to generate impressions overtime, without any additional effort or ad spend.

According the AdStage Q1 2019 benchmark report, advertisers paid a median CPM of $8.40 on Facebook News Feed and $6.30 on Facebook Messenger. On Instagram this number was lower with a $4.80 median CPM. Twitter had the lowest median CPM at $4.20. While

‍
These numbers represent advertising dollars spent on media buying. Major GIF platforms do offer media buying through their platforms. However, these tools are not yet publicly available to the average marketer, and this privilege (and the CPM data around it) is unavailable.

However, GIFs give brands the ability to start racking up thousands of impressions organically with no ad spend. While channels like Facebook and Google can also achieve similar results with organic content, it takes time. On Facebook or Instagram, you’ll need to put in significant effort and resources to grow a social following that pulls in thousands of impressions per post. On Google, you’ll need to invest in creating content that Google deems worthy of the first page of search results and build your domain authority over time.

With GIFs, anyone can get started with just a few GIFs and target keywords and begin pulling in quality impressions almost immediately. This is due to the distribution and sharing nature of GIFs. GIFs are shared by people, so when you get a view on your GIF, it's often compounded by someone sharing it with a friend. Unlike an Instagram post or blog post that is seen once and (often) never used again, GIFs are reused by consumers over and over again. Many people even have favorite GIFs that send frequently in messaging conversation or use repeatedly in Stories on social media.

GIFs as a marketing channel is still in its infancy. Many major brands, and some of the worlds biggest advertisers, still aren’t investing in GIFs. There’s a few reasons why this isn’t happening. Some don’t realize the potential of the channel, but many brands that do see the value can’t invest in the channel because there is a lack of metrics to show performance and ROI of GIF marketing campaigns. This is rapidly changing as GIF platforms (and us here at Giflytics) are investing in creating the tools to help brands measure performance of their GIFs. Because of the current lack of performance data, and the subsequent lack of brands investing in GIFs, the GIF space isn’t as crowded as Instagram or Google search results. There’s still an opportunity for brands to make a significant investment in the space and dominate keywords relevant to their industry and brand. Similar to brands that reaped the benefits of investing early in social media, the current state of GIFs has created an opportunity for brands to be an early adopter in the space and enjoy the benefits for years to come.

The Impression Value of a GIF

GIFs have an extremely valuable impression relative to other marketing channels that use impressions to measure performance and ROI. Unlike an impression in a newsfeed or search engine results page that easily skimmed or overlooked, a GIF impression comes when a user actively searches for a GIF to send to someone they are communicating with.

During a typical messaging conversation a consumer will search for a GIF to respond to a recent message. This consumer actively searches for a relevant GIF to use as a response in the conversation. The receiver of the GIF views it (many times over and over), contextualizes it, and responds to the GIF, often times with another GIF.

If this GIF includes branded content, both users are contextualizing the brand impression and message. If the users realize a GIF they are using is branded content, they will most likely have a positive opinion about the brand, since it has provided value to them by improving their conversation and deepening their connection with the people they message. If the users don’t consciously notice that they are sending branded content, and just think they are sending content that is entertaining and relevant to the conversation, they are at the very least, subliminally having a positive experience with the brand. Either way, in the mind of the consumer, their view of the brand has improved whether they know it or not.

In short, with GIFs in messaging, two consumers (or a group) interact with the brand for a period of time, contextualize it’s content, and measure its relevance to their conversation. This sequence yields a highly valuable impression and further engagement with the brand.

A recent study by IPG Media Labs found that 29% of TV ad deliveries were not “viewable”, meaning that no one was in the room for at least 2 seconds during the TV commercial. Digital video content was even worse with 31% being “unviewable” due to poor placements. This creates false positives into how many impressions video content is truly bringing in. 30% of all video content (digital and TV) that is delivered is not even being viewed. This is a result of ads being delivered to screens that no one is in front of, and in news feeds and websites that consumers scroll directly past or can’t see.

GIFs don’t experience this problem. Due to the nature of consumers actively searching and choosing to send GIFs to each other, GIFs have very high viewability. They are delivered directly into messaging conversations, not by advertisers, but by friends within the context of conversation. Unlike video content that is marketing something directly to a consumer and typically tuned out, a GIF expects a response because it’s sent in the context of a conversation between friends, not a dictation from advertisers.

Even though GIFs have been around for over 30 years, marketers have just begun to take GIF seriously as a channel to engage consumers within the last 2 years. GIF marketing is still a very nascent space, many of the world’s top brands still haven’t begun to take GIFs seriously. It’s the wild west. This gives brands, especially smaller players and those that were late to the social media boom, a chance to be an early adopter and own their branded and industry related keywords. It’s a no brainer, every brand should invest in creating GIFs to engage consumers. GIFs are the best CPM value in marketing right now.